With only 105 first form students and a faculty of four Jesuit Fathers, Campion College opened its doors on January 5, 1960 and the first lessons were given that day in a pavilion and in classrooms borrowed from Campion Hall Preparatory School. Campion Hall Prep had been founded in January 1940 when Rt. Reverend Thomas A. Emmet, S.J., D.D., was Vicar Apostolic of Jamaica and V. Reverend Thomas J. Feeney, S.J. was Superior.It began on the premises of St. George’s College but moved to Roslyn Hall (now known as Campion Hall) at 115 Old Hope Road on January 6, 1942.

To make room for the growing needs of Campion College, the prep school graduated its last class in December 1962, just as twenty-two years earlier it had taken in its first students to supply the needs of St. George’s College.

In just over 50 years, Campion has become the premier high school in the island with over 1400 students. Some of the highlights in the history of the school include:


True to its Jesuit identity, the school’s mission is to create “men and women for others” by forming graduates who are “intellectually competent, open to growth, religious, loving and committed to justice.” To that end, the school has a rigorous academic curriculum as well as a carefully designed, expansive co-curricular programme for character formation. This co-curricular programme includes some 40 clubs and 15 sports and features service clubs which range from the Interact and Key Club, to the Ministry Outreach (which visits children and senior homes weekly), to the Champions Homework Club, whereby Campion students tutor children from the inner-city community of nearby Chamber’s Lane.
.true-accordion dt.current, .true-accordion dt.current:before { color: #6A8D94 !important; }

CAMPION & THE SOCIETY OF JESUS

Not only did the Society establish the school, but its Jesuit Fathers also served as members of staff, encouraging willing young minds in all aspects of learning, and laying foundations in religion, the arts, and science.

Today, Fr. Joseph MacWade, Fr. Con Mulvihill and the Chairman of the School Board, Fr. Peter McIsaac, continue the tradition of Jesuit service to the school. 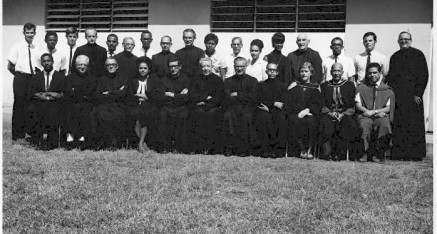