Last Wednesday, the Campion College U-19 basketball claimed third place in the Southern Conference ISSA/KFC basketball championship. The team was able to defeat JC, after a nail-biting loss the Friday to Wolmer’s High in the semi-finals. Only two players on the team have made it this far and for this we commend this year’s team for their performance. Having been at all the games I can say that the team is more than deserving of their achievement. 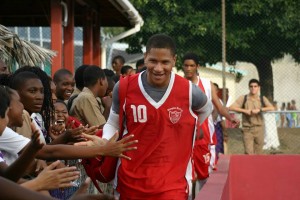 At the Wolmer’s match, 20 down in the second quarter in the semis, neither the players nor the fans were unnerved. They were cheering and fighting no matter how the score looked. A spectacular, ran by Bradd Smith(6A),  brought us to a single digit deficit. In a heart racing fourth quarter Wolmer’s barely escaped with a 5 point lead. The players’ energies were barely matched by the spectating Campionites present who cheered them on until the final buzzer, even though Campion ended up losing.

Going into the third place match, the Campion team went in with one thought, one goal, to win: to have something to show.  Even through dreary legs and pounding, anxious hearts, the team showed intense  dedication and this reflected in the final score:  46- 54 Jamaica College- Campion College.
Though we all know of our Under 19’s team eminent success, we must not forget to acknowledge the efforts of the under 16 team. This team showed resilience, and under Garth Richards’ coaching, fought hard in the quarter finals but lost by one point after missing certain key chances (luck was in Jamaica College’s favour).

The Under 19 team’s journey has only just begun! They have qualified for the all island competition which should start after the finals, which is still in progress.
Our team is the strongest it has been in years and with YOUR continued support our team can plan to go for the all island titles.