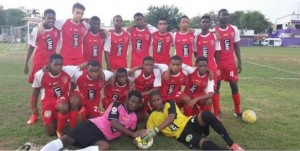 It was finally match day for Campion College who sought to upset Cup favourites Kingston College at their home to begin the ISSA Lime Manning Cup 2014 season. Campion played like worthy opponents from the sound of the whistle as the Campion midfield had control of the pace in the early stages of the game. Campion’s first choice goalkeeper Christopher Lynch was the highlight of the match as he kept the Hopefield team in the game with brilliant save after save. However, in the 70th minute of the game, two defensive lapses caused two late goals to be tallied up for the North Street favourites.

Campion’s fighting spirit was best embodied by the focused Christopher Lynch and midfield talisman Mario Barnes who threatened the Kingston College goalie with a magnificent 35 yard volley in the 50th minute which teased the keeper since spinning his boot. This Fortes vs Fortis encounter is a bit nostalgic due to our SC quiz finals matchup and even though we lost our spirit was not quelled.

Match day two, yet another spectacular performance by the Campion College at this home match. They were set to face Jose Marti in what was truly anyone’s game. Support was vital and fortunately in abundance as Deep Dene was flooded with the proud faces of Campionites. The result was an “unexpected” performance that had reached the ears of the Campion faithful followers and alumni. Unfortunately, we lost 1-0 in a hotly contested match that remained in the balance for both teams. Star goalkeeper Christopher Lynch put on yet another praiseworthy performance that set the tone for the tempo of the team’s motivation in going forward to the Jose Marti defence.

Written by David Answer 6A