Many had their doubts a 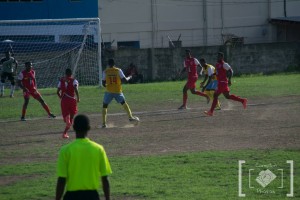 bout the match between St. George’s College and Campion College. Their doubts would have been justified. St. George’s College has won Manning Cup on numerous occasions the most recent being 2012 and well let’s just say Campion has not been able to make their name in Manning Cup just yet. However, regardless of these facts, no one expected the end results of this match. Just before leaving Campion for George’s, the school was already abuzz with news that Campion was down by 7 and the half time whistle had not been sounded. It was clear the game was over already even with over 45 minutes to spare. The results of the match was already set. St. George’s College would walk away with 3 points and with a goal difference like that, surely they were at the top of the table and would undoubtedly leave Group A to progress. Campion on the other hand seemed to be kissing the Manning Cup dream good bye with each conceded goal.

Arriving at George’s presented me with an unfamiliar atmosphere. Students, teachers, football junkies and curious spectators swarmed the preciously pampered field. There had to be at least 500 people there, including representatives of the press. Campion, thankfully, was well represented, supporters shouted encouragement to their school mates. The atmosphere was electric and it was obvious why. The Blues skilfully maneuvered the ball through the feet of the Reds and often finished with a goal, making it look easy. This is not to say the Reds did not put up a fight. Christopher Lynch, Campion’s goalie made impressive saves and the forwards worked hard keeping the ball away from their half. In the 71st minute, Campion’s very own Jervaze Green finally got a ball past the George’s goalkeeper. However George’s responded in the 75th minute with another goal. Soon the referee blew into his whistle and brought the game to a close once and for all. 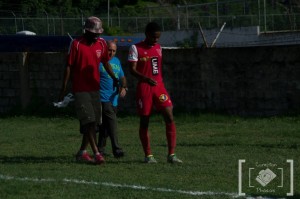 The score was 11-1 to George’s. The Might Blues triumphed once again wearing big smiles while the Reds walked off with defeat imprinted in their faces, shoulders slumped and heads down. I really hope they know that no Campionites left the field that Friday afternoon ashamed of them or any less proud to wear the Campion uniform. The Manning Cup dream began to look dismal but the fight is not over. Let’s go Campion let’s go!

Written by Trevann Hamilton 6A